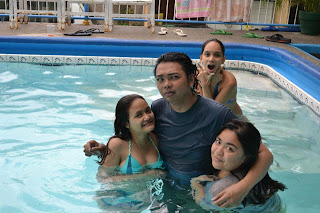 It's been relatively quiet the past couple of weeks, which is something I've come to look forward to since becoming sober. The past two weeks have been more of a transition phase for me and the new relationship I'm in, and the people in my immediate vicinity as everyone acclimates to the surprisingly ever-changing world of the Think Tank.

I'd like to think I'm settling into my new roles well (yeah, I have more than one), despite being overwhelmed at times. As my first year at the Think Tank comes to a close, I took the time to look back at everyone that has changed for me professionally and personally, and decided not to write about all that shit. Instead… this post.

A Semblance of Sanity.

The new relationship has been great, and I'm happy to report that this has to be the most normal relationship I've ever entered. While I've had a number of relationships, I've been pleasantly surprised to learn that I am still eligible for a few "firsts". Like a Valentine's Day that's actually pleasant. Or having a girlfriend that can me stop drinking energy drinks. And even willingly getting a haircut that was not inspired by so much stress that I take it out on my usually long and unruly hair. You know, couple-y shit like that.

I'm extremely happy. So much so that I don't think my brain has been able to process exactly how to respond to said happiness.

Stand Up with The Salesman.

After two weeks of missing stand up, due to perfectly good reasons, I brought the girlfriend with me to do open mic night, an event that also marked the big return of The Salesman into my normal life. Just weeks after I gushed about how being a part of the fruition of the Salesman and his girl's relationship, I was shocked to learn that they are on the verge of splitting up, with the Salesman using the "H" word a few times. It's sad, really, cause when the shit hit the fan on my previous relationship, the two of them were the among the first to take my side. When this new relationship was starting, or it was the two of them who pointed out the possibility of this actually happening. Whatever happens, though, both'll remain my friends. I just hope things work out.

Regarding my set, I didn't do as well as my first show of the year, but I think I did fine. I have several months before Hong Kong. I plan to be really ready by then.

My participation in the family business is completely underway, so I see nothing but busy days in the coming months. I'm not quitting the Think Tank, especially not now. I'm actually excited to see if I can manage to pull this off… writing consultant, stand up comic, indy filmmaker and boyfriend… all without alcohol, drugs or energy drinks.

If I'm still sane in six months, I'm going to attempt to scale a mountain with my dick as my singular tool for ascent.

The Breakfast Club recently said goodbye to our official leader in a touching and quiet manner (though there were moments of Islander chicanery and belly dancing). It's rare for me to find a boss that I actually respect, and with all the jobs I've had in my long and unremarkable professional life, there have only been three of them. One was from MTV, the other was from Purgatory, and now, her. It's not just because she let me get away with murder, and it's not just because she cut me a lot of slack last year during my crazier days. I've been in the company for a a year now, and I've never seen anyone who took the time to get to know every single one of her people. This is not a knock on the other higher ups in the company… I think it's just a perfect combination of good leadership in the face of an extremely diverse work force.

With her gone, a couple of people have taken over. There are also some other foreseeable problems with her departure and the turnover of power, and like any fan of stories, I'm excited to see what happens.

The attacks are back. Nightly. And they're getting stronger. This is…interesting. It's good to have a hand to hold these days.

"Until you see me in your dreams

The Rest of January 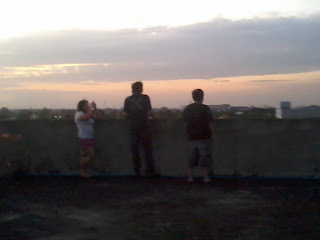 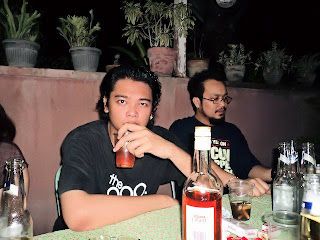 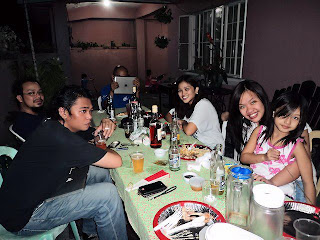 Aside from this one instance wherein I got so drunk that I had to throw up in my hand, I have been sober for the remaining days of January. I'm still getting used to it, considering how comfy I've gotten with having a constant slight buzz providing a much needed amount background noise that allows me to filter out the stupid shit. The clarity, of course, carries a bunch of bad stuff as it does the good.

I haven't written in this blog for three weeks now, with good reason, of course.

Now that I've reached the dreaded 3 and oh, the thought that I'm supposed to be dead by now still lingers. Things got rather interesting after the birthday. The year ended well enough, and the 30th was amazing, so it goes without saying that what followed was completely unexpected.

Spitting Fire on the Mic Once Again.

My first order of business after turning 30 was of course, getting back on stage and working on my stand up again in preparation for another shot at Hong Kong. (That's one of my goals for the year, by the way.) And on that first night back, frankly, I've rarely felt better about hitting the stage. It was like being in Votre again. Not just because I think I had a good set, but because the energy was back. I was amped, everyone was there, everyone was having fun, the whole thing was fueled by passion, and I loved it. Hell, even The Salesman did a set again after a year or so of merely hosting, and I could feel the catharsis as he yelled out "Fuck Merk's".

I gave them my word that I'd be doing open mics weekly again, a promise that, amazingly enough, I broke the following two weeks. For good reason, of course.

But I will be back soon, and I am recommitted to the cause. The whole shit just got fun again. As one of the comedians present that night said, "To a stand up comic, silence is like bullets. And at this point, I'm bulletproof." Hah! Good times.

The status quo has changed drastically the week after the 30th. For one, I have a new place to call home. Sorta. I've decided to live with three other members of the Breakfast Club, at least on a temporary and part time basis. I've sworn off having roommates back in 2009, but here I am, shacking up with three other individuals who, given a different set of circumstances, would not spend time with each other on a social basis. Then there's the matter of rent. I can barely survive paying utilities for one house, and now I have the burden of two. The perks outweigh all that though, and I've always wanted to have a place with rooftop access.

As I mentioned earlier, last year ended in a very favorable fashion for me, and this is thanks in large part to the Breakfast Club. In the months leading up to the end of the year, from the moment the office reopened its doors, something happened and a natural bond formed between me and the rest of the team. Like with most groups though, you take away a major element, introduce a variable into the equation and the entire thing may end up a huge fucking mess. That's what happened. The leader of the group, our boss, has announced her resignation in a rather surprising fashion. There were signs, of course. I and a few others have picked up on this, but no one expected it to be in such a sudden fashion. One of the members of the team will be taking over leadership duties as the world as we've come to know and love becomes nothing but a good memory.

Old and wise guy that I am (Hah!), the possible repercussions of such a change are easy to predict. Normally, I'll take this as a cue to leave, but I decided to forego my departure. For good reason, of course.

Right now, I'm excited to see what happens. I've been moving around for so long, I've never really stuck around to see the effects of change come to many of the people in my life. (Purgatory being a prime example.) This whole new chapter may very well be the thing that I need right now.

Despite that my world has slowly become revolved around the office and the people within it, I've ensured that what remains of my past life still play an active role in my current one. The Scoobies in particular, who have taken it upon themselves to have another birthday party in my honor (as well s Marvi's sister's.), seem to be constant figures in my life. (Three parties for thirty years. That's one per decade.) The Big Man and The Critic, who seem to be the remaining surviving members of the Hidalgo Boys (The Human Torch has been somewhat of a flake lately) also seem to be not going anywhere.

The Big Man and I even took an afternoon out to talk about introspection, and basically just catch up. He's at a point wherein life is starting to become questionable again, and as a friend, it befouled on me to, at the very least, listen. There was even a slight throwback to the time when we were broke but would find ways to have a good time. The way tinges are going, he and I, as well as the Critic and the rest of the Scoobies, seem to be well on our way to growing old together.

Even the Salesman's people, the crowd at San Mig, seem to be making a comeback.

And all throughout January I've managed to stay sober in their company, something that's extremely difficult to do. For good reason, mostly.

Now, I've been alluding to good reasons all throughout this post, so I might as well spill what happened as the month ended. Like with most good things that happened in my life, this one came out of the blue pretty much took everyone, myself included, by utter surprise. Point is, I am, once again, off the market. And no, I'm not with the elusive Erin, nor did i get back together with anyone from the past. As all the changes were occurring all throughout January, both internal and external, one person stood out and stood by. Everything just seems to have fallen into place, and for the first time in a long time, I'm in a relationship that feels right. She's just really awesome, and with most of my current decisions, I'm more than happy to make her my good reason.

Yeah, January was a very weird month. With good reason, of course.

"Lights turn on and dark turns outside, blindside, dream big, you're next in line