Three Inches From The Fan 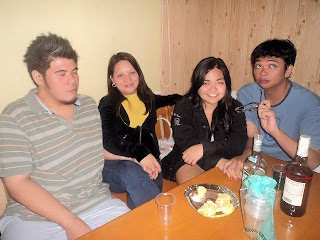 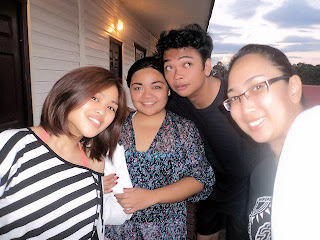 The past two weeks, I've dealt with the changing of the system, the thought of actually selling out, a small man's delusions of grandeur, and the annual funeral that me and the Big Man seem to be usually present for. Don't get me wrong, the previous days haven't been completely bad, as I did take a few steps towards a road I never expected I'll take.

As a result of all that, I'm an emotional wreck and a mental disaster. Oh, the perils of sobriety. It's making me grit my teeth at every little thing that comes my way.

The Office Space and Other Strange Places.

With the boss' departure comes new management, and with new management comes new threats to life as I know it. While I feel no hostility towards the people who have taken the reins of the team, there are things that I've been used to that I don't think will still apply once this entire shift is in full swing. I guess I'll just have to wait and see. The only thing keeping me at the Think Tank these days is the girlfriend, which I think is a good a reason as any, and while she's there, I'm more than willing to deal.

One of the bigger changes the team has gone through involves the sudden shift in one teammate's attitude. The guy vanished for weeks without so much as an apology for the work he's leaving behind. That shit I don't really care about. The others did. In fact, it has become so big an issue that everyone, both old and new, has become embroiled in reactions both mature and otherwise. I personally have attempted to distance myself from the matter, content in throwing a wise crack here and there (as per usual), until the said teammate turned his rather douchey ways towards my direction. I've always had a problem with people who have the inability to see how his or her actions may affect the whole. I had no problem when he vanished and started slacking off as long as the consequences of his irresponsibility affected him and him alone. However, the fallout of this guy's dickiness has come to intrude into my own world at the worst possible time. To make matters unspeakably worse, the girlfriend was involved. Awesome. When he showed up for work, I was one of the few who actually treated him the same way before he did his disappearing act. Yeah, that shit is not going to happen again.

Another Foul Mouth Shuts Up.

A few months ago, I mentioned on this very blog that I met the craziest old man ever. when I met this guy, and this is no exaggeration, the first thought that came into my head was that that was who I'm going to be when and if I get old; crazy, smoking like a chimney, and flaunting a mouth so dirty it would make a nun throw up blood. His first words to me were literally a string of curse words followed by what seemed to be a backhanded compliment, but he did so with a particular style that quickly endeared him not just to me, but to all of us (The Big Man and the rest of my boys). Then came a point wherein every time we'd come to see him served only as a precursor to an amazing night, from getting drunk in faraway places, or making incredibly inappropriate but nonetheless fun memories at strip clubs. We even planned on bringing him along on one of our jaunts.

Months ago, he was stricken with an illness that rendered him confined to a hospital bed, and I was to preoccupied to pay the dude who had nothing but good things to say to me (which he expressed in a rather offensive way) a visit. When I learned the guy passed away, on the Big Man's wife's birthday, I felt really bad. I think it says a lot about the character of a person when he can make someone he's only met a handful of times think so highly of him.

When we attended his wake, the Big Man and I, along with Jo F'n Regis (more on that in a bit) paid our respects the only way we can; by turning the wake into one big one note joke. I hope the old man appreciated it. He will be missed.

What with my association with the family business seemingly in full swing, I know I had to get some of the best people I could for this initial project that would very well determine my role in the company for years to come. Granted, I never asked but was merely asked to join this riffraff, I still wanted to produce a somewhat successful outing. The best people I could muster were, unfortunately, unavailable, so I had to make do with people I actually trusted. (That was a slight rib in case someone got offended. Heh.) The Big Man, with whom I've shared the majority of the stupidly reckless endeavors I've come up with in the past, is on board. Jo F'n Regis, who I seriously believe has sheer untapped potential, has been called on. And of course, the Uber-Geek is rounding up my motley crew, simply because he is perhaps the most talented guy I know who has a total lack of an attitude problem.

Doing a rinky dink movie that I normally won't even watch much less make is something I never envisioned, but I believe any task, no matter how daunting and inane, is worth doing with the right people. Let's go make mama proud, boys.

I've had a number of relationships in my life. That is something most people know about me. Hell, I had someone crunch the numbers and apparently that I average one new girlfriend every 10 or so months. But, while I'm sure I've been on this rant way too many times before, this latest one feels different. It feels right. If it didn't, then certain events during the outing wouldn't have happened. For the first time ever, I am with someone that I want in my life so much that I actually introduced her to "my people". The Scoobies, along with The Big Man and his wife, had the privilege of meeting the girlfriend for weekend in some resort in the middle of nowhere. A place where we we had great food and great times, and hopefully the first of many outings me and the girlfriend would have with my adoptive family.

See, it's always been a big deal for me to have a girlfriend good enough to formally introduce to them. These aren't just my friends, these are my roots. The Big Man and I pretty much grew up together, while the Scoobies represented the very best of my college years (even though I only was with them during that final year) and my transition from student to adult. These people are the only constants in my life, and frankly, I never introduced anyone to them as my girlfriend. Sure, they've met some of the exes, but it's mostly due to happenstance or they just knew the girl even before we got involved. Truth is, like the Scoobies and my boys, I want her to be a constant as well, and while things are relatively new and anything is still possible (and looking at my history, the odds aren't exactly with me when it comes to women), I am hopeful.

It was a great weekend with some of the greatest people I've ever met. And I'm glad that roster now includes her.

I did stand up. I sucked. Tough crowd and I was drawing nothing but cricket noises. Oddly enough, I felt great afterwards.

The past couple of weeks I've been stressed out, broke, tired, anxious, pissed off, wanting, frustrated, lost, afraid and emotional to the point where I'm a few steps away from insane. (I blame the lack of inebriation. Seriously, I've been mostly numb from constant drinking for like, more than a decade up until recently.) But, with the glaring exception of the fat, smelly motherfucker who seems hell bent on having other people clean up his mess, I'm actually having the time of my life. Yes, I admit I missed this. I missed having my back against the wall, odds stacked and nothing but my wits and my mouth to save my ass. I have an amazing group of people around me, regardless of the fact that we rarely see each other. I have an amazing girl to see me through these crazy days. And I have the staunch belief that once the smoke clears, as with several times before, I'll still be standing, not quite unscathed, but more alive than ever. Cheers.