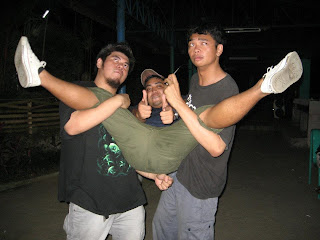 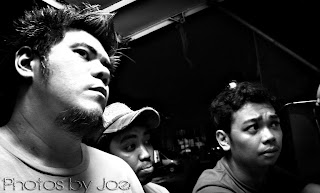 It's been a month or so since I've been in the mood to blog, but everything's a tad heavy now and I need to unload some baggage. Those who know me know that I work mostly alone, and those who have worked with me on certain projects know that I have a preference to take on the bulk of the work. It's not exactly a simple task when it comes to making a movie, but that's how I like it.

The ironic thing about all of this riff raff is that when I turned 30, I made the conscious decision to lower the volume on the normally loud life that I live. The plan was I do my work at the Think Tank, go home, do stand up whenever the need to feed my delusions of talent and probably try and get back to teaching. You know… quiet, boring, peaceful, that sorta shit. What happened was the exact opposite of all that I planned for.

Not that I'm complaining. My heart just isn't in this whole hullabaloo anymore. But, shit's here, shit's on, and we try our best to deal.

The weeks leading up to the shoot have been mostly me going bak and forth from the office to Manila and back again (and from time to time to Laguna to accompany the girlfriend home), all the while dealing with the usual office drama that's more tiring than work. Aside from the bills and the debts, I don't really feel motivated to be all I can be in the Think Tank, largely because I see a guy who's been fucking things up and pretty much getting away with it. (Then again, he was just waiting to get shitcanned, but still.)

On the movie side of things, I have a cast that's less than exemplary (which I was told I had to share with another director who's shooting a different movie at the same fucking time I was), and assembling my crew of misfits that, to be perfectly honest, I wouldn't have gotten if I had a choice. It's not a comment of my perception of their ability, it's an exhibition of how little I'm looking forward to this project that I had to surround myself with people that could make this entire experience somewhat enjoyable.

To make matters worse, when I was initially taken to the location, which was some rinky dink resort smack dab in the middle of nowhere, I realized that it didn't fit my script. So, for the sake of getting things done, I went and just rewrote the damn thing.

Yup, things were far from looking up.

The week of the shoot started out in a far from stellar way. I was asked for a "one on one" at the Think Tank to discuss my far from impressive performance at work (read: my usual performance at work). So there I sat, being told how to manage my time, and all I could think about was how discussions like this was never necessary when the old boss was around. Don't get me wrong, I do respect the new management, but one of the reasons I was able to stay at the Think Tank for a year now, and I guess I've gotten used to a specific way things are done. The old boss would have just sent me an email, and that's all it would have taken.

When it was time to shoot, I knew beforehand that I was in for a rough time. I apparently had no fucking idea. Two days of non-stop adrenaline that left my body aching, my mind a mush and all I wanted was that at the end of the two day piss-fest was a nice couple of hours in the bar. What I got was a couple of hours driving around and then falling asleep in the bar.

Still, props to everyone who helped out, both within my own crew and out.

I don't want to get into the details on how the days after the shoot felt as if Murphy's Law was designed specifically to fuck with me since I've been pretty much a whiny prick all throughout this post. The movie is still a work in progress. (A shitty one at that.) While I've been working round the clock to balance everything, I've been fortunate enough to be graced by the presence of some really valued members of my circle. The Salesman and the rest of my people from San Mig. The Girl Who Saved My Life. The ever-loving Scoobies who made Easter Sunday bearable. The girlfriend. My crew. Even a couple of cast members. All of whom managed to make all of this shit bearable.

I still have no plans regarding future movies, though my crew seems to be amped up for it. I don't know if I want to stay at the Think Tank, though the Breakfast Club seems to be having as much fun as ever (particularly after the departure of one bad apple). I don't know what I want, but I do know that it's not exactly this. I'm not this guy anymore, or at the very least, I don't want to be. I'm retired, or I'm supposed to be.

There's something missing here. Something to provide a sense of fulfillment that would allow me to deal with the noise, the people, the entire emptiness of this. When I find it, that one thing that I know is pure and valuable, then I can go to war again. Be that guy again.

For now, I'll edit my shitty movie and maybe even head to the office to do my shitty markups and smile, hoping at least one other person sees how blatantly asinine all of this is. I feel alone.

"Skin against skin blood and bone

You're all by yourself but you're not aloneYou wanted in now you're hereDriven by hate consumed by fearLet the bodies hit the floor" - Drowning Pool, "Bodies"
Ipinaskil ni sunriseshotgun sa 4:57 AM Walang komento: